Home » Blog » Bring your own board (BYOB) 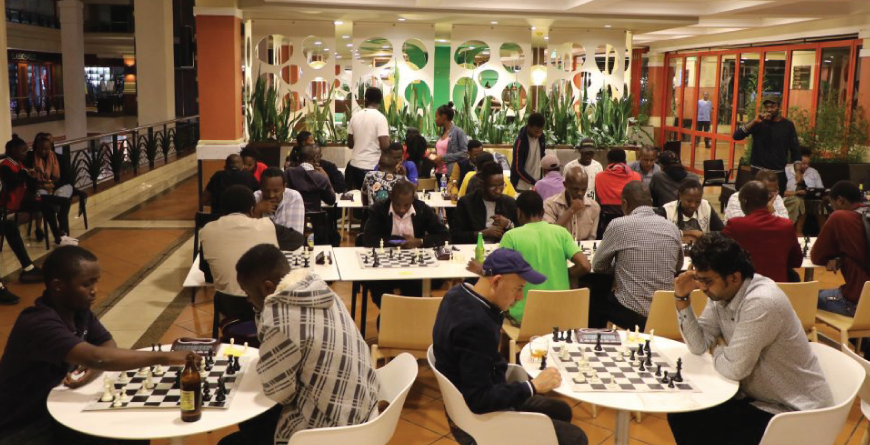 On the evening of Friday 20th September, players trickled into Galleria Shopping Mall’s Food Court for a grueling nine rounds of battle. This time they were ready to command their troops to a 64 black and white square battle ground with their well-prepared defenses and attacks hoping to be crowned the 6th Edition BYOB (Bring Your Own Board) King, snatching the crown from the jaws of the hungry blitz beast Joseph Methu, who wanted to be the first player to win it twice!

The first fifteen players to register and arrive early to the venue were fueled with two drinks courtesy of Ben Nguku. And those who asked ‘where is Kaidanz’ jinxed their hopes after hearing his laughter across the mall. Round one started and everyone checked their pairing to see their mortal enemy and plot for their eternal demise.

On his maiden appearance, Jackson ‘Jackal’ Kamau met his predator Muganda Imo and was utterly thrashed while Lenox the ‘Regulator’ Mangi fell prey to Brian Irungu and uttered, “God help anyone who will meet me in the next rounds”. Those who won the first round asked their opponents to blame DJ Tracic for the good music but winning one battle definitely did not mean winning the war.

With the start of the second round it was unclear where the dust would settle and the sieving process had begun, separating the men from the big boys and the big boys from the small boys. ‘Tricky’ Ricky unfortunately was not big enough to remain in the men’s league and fell in the big boys category when he got robbed my Morrel Omondi. Moses Andiwoh was forcibly asked to leave the men’s league when his student James Kabui proved to be the master.

The saying ‘You cannot kill a dead man’ was put to test when Andiwoh came face to face with The Regulator in the fourth round. Andy saw a blurred mating net with inaccurate play from his opponent. He stretched his hand ready to accept resignation from Lenox. The Regulator rejected his own resignation.

Patronizingly, Andy decided to take a walk, and get a drink whilst narrating his resurrection to those who had been hammered in less than a minute, overlooking a simple move that made him think Lenox did some hocus-pocus to the position. Death followed the dead man to the grave. What an unfortunate turn of events!

Things got more interesting in the fifth round when ‘Kaidanz’ Atwoli met the intrepid Lenox ‘Regulator’.

(Before the start of the game, with loose translation in italics)

Lenox: Nitoe wapi woga? Where is the fear coming from?

Atwoli: Lenox i am offering you a draw.

Lenox: I reject your draw offer.

Ben Nguku on the other hand did not want to get buried by Lenox. With mate in one and one second on the clock for Lenox, Nguku decided to gift his King with powers bestowed in the Queen. He flew his King from the a1 square to the a8 square?! Hypnotized and wondering what type of King move that was, Lenox’s  one second was buried in sand and the point was shared since Nguku had insufficient mating material and Lenox had no time to call for foul play.

The final round started with the top boards being a preserve of the crème de la crème. Nguku hammered Panchol Madol as Lenox pinned Jackal’s Black Queen to the King, drawing a loud shout of disbelief from Jackal as he waltzed away in erratic fashion, knowing that his chance of securing a podium finish had evaporated.

When asked to give advice to Kamau, his conqueror  said, “Enda ukajue kupin” (Go know how to pin) proving that a pin is mightier than the sword. Githinji Hinga smashed Morrel and Methu  won his final round against Ben Cliff.

This made Ben Nguku wrestle the crown from Methu – who had won the 5th BYOB –  with 7.5 points making him the IGWE of the 6th Edition of BYOB Blitz Night taking home gift vouchers worth 4,000/-. The men were Panchol James Madol, Githinji Hinga and Lenox ‘Regulator’ Mangi with 7 points. Panchol got vouchers worth 4,000/- as Githinji magnanimously shared his winnings with Lenox for each to take home a voucher worth 1,000/-.

The big boys had 4 points to 6.5points while the small boys had 1-3.5 points. The next BYOB slated for October will be FIDE rated and each player will pay 150/- entry fee to cater for this; again, Nguku stepped up and offered to pick the tab for the first 15 players to register and show up, as the drinks offer stands to the end of the year!!

The event was sponsored by the management of Galleria Mall and organized by Terrian Chess Academy. The Chief Arbiter was NA Ronald Bolo assisted by FA Joy Wangari. All photos courtesy of Arongoey Photography.

Training Kids in Chess is my Passion 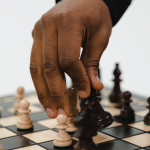 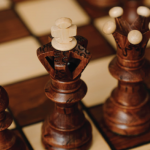 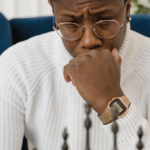